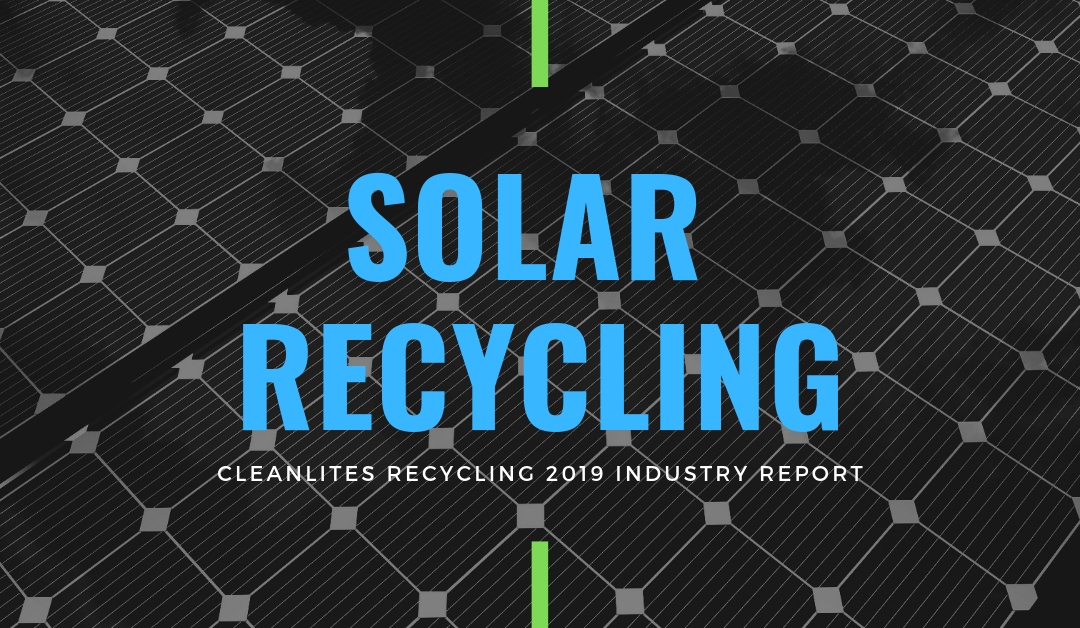 With technology and renewable energy advancing at breakneck speed, all reports point to a significant expansion in the global solar panel recycling market. Research company Market Research Future published forecasts that support a 33 percent annual compound growth between now and 2023.

Influencing this decision is large-scale, government-funded solar power generation, although the high cost of energy storage is liable to mitigate the growth somewhat.

One thing is clear, as investments rise in this sector, new installations will continue to occur. In 2017 alone, new installations increased by 17 percent. If this trend continues, and there is no reason to think that it will cool, it will create a glut of decommissioned panels that will be headed straight for the recycling market. As the years pass and technologies become more efficient, we will be looking at a massive pile of e-waste on the horizon.

As for today’s panels, even those close to the end of their useful lives now may not need recycling for another ten to 15 years. Although that might not seem like a dire issue off the top, in 30 years, we may be looking at 30 to 40 million solar panels that need to be disposed of.

In 2016, the International Renewable Energy Agency estimated that there would be about 250,000 tonnes (metric tons) of defunct solar panels by the end of that year. By the year 2050, this number could grow to 78 million tonnes.

Many of today’s solar panels contain heavy metals like lead and cadmium. If not disposed of safely and appropriately, they can cause soil, air, and water contamination.

Most of the contaminants are present in the panel glass itself, which makes up about 90 percent of the unit. Since this is the case, simply recycling the glass is not an option. Cadmium, specifically, can be washed out of the solar modules with rainwater. Were the glass to break, either while the panels were in use or after they have been disposed of, cadmium would leach into the ground around it.

In the recycling industry, the cost of solar panel recycling, unfortunately, exceeds the potential value of what is recoverable. Essentially, the lack of valuable metals and materials contained in the panels themselves means that nobody is eagerly jumping on the recycling bandwagon.

On the manufacturing side, many companies in the past have allocated revenues toward future recycling efforts, charging the buyers back for the work when it becomes necessary. However, this is widely viewed as an unsustainable practice and will increase the risk of more solar power companies going bankrupt in the future. As a result, and without any current government mandate to address this, thousands of panels have already ended up in landfills.

As the solar industry continues to evolve and grow, smart leaders will step up to address the problem, perhaps pushing a clean agenda for future panel design. Short of legal requirements, however, it is up to those disposing of the units and their chosen industrial recyclers to hold the tide.

If you would like to learn more about what Cleanlites can do for your company’s e-waste program, reach out today.